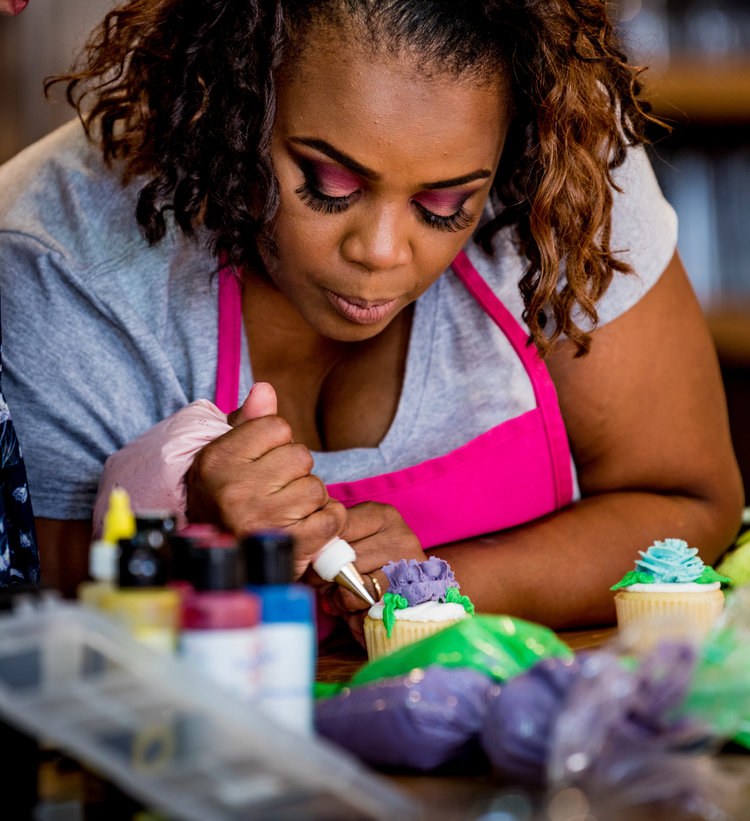 Among the advantages and opportunities afforded by the scholarship, Ms. Lavigne will have use of the museum's Rouse's Culinary Innovation Center by JennAir at the Southern Food & Beverage Museum(SoFAB) free of charge for one year. SoFAB staff will also assist her in marketing her business, Deelightful Cupcakes, and making the connections she needs to grow her business.

Upon meeting Dee I knew she was extraordinarily talented. With her skills, professionalism and boundless enthusiasm, SoFAB's team quickly determined that Dee would be the ideal recipient of a scholarship for use of our licensed commercial commissary kitchen. Assisting culinary entrepreneurs in turning their career dreams into realities is central to what we do.

A graduate of the Culinary Institute of America (CIA) in Hyde Park, NY, Dee was born and raised in New Orleans as one of eight siblings. She started baking and cooking at the age of seven.

Following high school she enrolled at UNO with the intention of becoming an accountant. At 18 she moved to Stillwater, Oklahoma with her high school sweetheart, Reynell, and was married one year later. "While my hubby spent his days studying and playing football for OSU I worked full time for ARAMARK in the catering department at the university. After two years I took a job at Wal-Mart in the bakery department as the lead donut decorator. It was there that I developed and honed my cake decorating skills."

Her next career move was the Stillwater Country Club where she worked a full time prep cook and enrolled in a vocational school for culinary arts full time.

"That's when I really felt that cooking was something I was really good at," Dee said. "After speaking with my instructors I started looking at the number one culinary school in the country, the CIA! I was unsure of making a huge move almost 1,500 miles away so I let the idea rest in my head for a while, which was about two months before I got up the nerve and call the school. My admissions advisor told me everything I needed to enroll. I completed all the required paper work ASAP, except a required essay. It took me even longer to think about what I would write about. Around that time my father in law had a heart attack. That really changed my outlook on how short and valuable life is. On the drive back to New Orleans is when I wrote the essay that changed my life. I was accepted only one day after they received my essay."

After graduating from the prestigious school she moved to New Jersey where she worked for a country club in Baskin Ridge New Jersey as a manager. Two years later her first son, Reynell Jr., was born. "At the age of 18 months our son was diagnosed with autism. Although this was a tough time I pressed on." She most recently spent 10 years with Whole Foods Markets as a Bakery Manager.

Exploring Olive Oil in Cocktails and Beyond

Olive Oil in cocktails and beyond, with Olio Zucchi.

Chef Dee Lavigne Is Ready to Take Over New Orleans

With a pastry business, weekly tv cooking spot, and role as SoFab’s education director, Dee Lavigne is in command of her career.

We are hosting a FREE virtual festival, Hey, Sugar, with Domino Sugar celebrating the best of Fall baking, cooking, and cocktails.

Choosing the best of the best in New Orleans food is almost a Herculean task.

Playing a part in our community's future

Dwynesha "Dee" Lavigne is the founder and owner of DeeLightful Cupcakes, a gourmet cupcake and confectionary treats bakery.